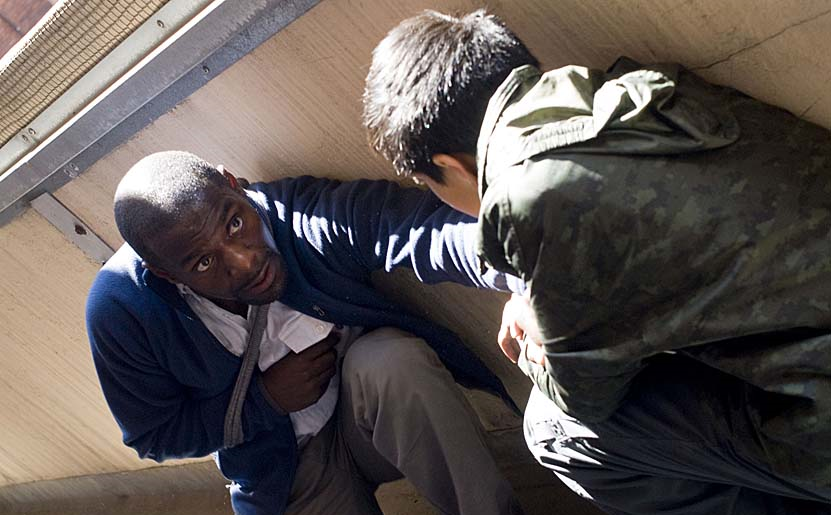 FOLLOWING THE TWO week gap after the transmission of the series’ opening instalment, the second episode of series two of Survivors was broadcast at 21:00 on 26 January 2010, ten years ago today.

Episode two brings to an end Abby Grant’s group’s journey into inner-city Birmingham. That trip began in the closing episode of series one as Abby and her associates set of in pursuit of Najid – who has fled their settlement. In this latest episode, separate storylines explore how Tom and Najid independently become entangled with a local gang of scavengers – Tom robs them, while Najid befriends the gang’s youngest member; how Abby is able to escape confinement in the scientists’ laboratory; and how the entire group is eventually reunited.

Back in 2010, the detailed review of the epsiode in the World’s Apart guidebook said of this intelligent action-and-adventure story:

By the end of episode two the group are together again, but Abby remains a marked figure (as she herself suggests in her distress), and tensions and strained relationships within the family are more exposed than ever. Their position remains extremely grim – they are still homeless, without resources and hunted by both Willis and Whitaker. With Survivors consisting of just six episodes per series, it is inevitable that dramatic developments are sometimes truncated. But Hodges’s two episode sojourn in the city, culminating in Abby’s return, feels neither rushed nor overly contrived…

The thoughtful elements of episode two also dispensed with any concerns that series two of Survivors might neglect the insightful in favour of the straightforwardly visceral. With the family of fugitives now forced on the run once more, it is time to leave the city behind and begin exploring the realities of post-plague Britain in earnest.

Survivors is a two series (twelve episode) post-apocalyptic TV drama broadcast on BBC One and the BBC HD channel between November 2008 and February 2010. The BBC declined to commission a third series.

Brought to the screen by showrunner (and lead script writer) Adrian Hodges, the programme was a 're-imagining' of the classic end-of-the-world drama Survivors, devised by Terry Nation shown on BBC1 between 1975 and 1977, and drew its initial inspiration from Nation's 1976 Survivors novel.

Both series of the new Survivors are also available for purchase through iTunes.

The cancelled show attracted renewed audience interest in the US, when both series one and series two of Survivors were licenced by the Netflix, Amazon Instant Video and Hulu service streaming services.

In the UK, in 2012, the BT Vision service began to offer both series for streaming download, as part of its range of TV channel packages and on a pay-per-episode basis.

In July 2013, audio-drama publishers Big Finish announced that they would be producing collections of new audio dramas based on the original (1975-1977) Survivors. The first series of new Survivors audio adventures was released (on CD and as a digital download) in June 2014.

Following an extremely positive reception, a further two series of Survivors audios were commissioned in 2014; with series two released in June 2015, and series three following in November 2015.

An audio-book of the 1976 Survivors novel (on which the 2008-2010 remake of Survivors is based), voiced by Carolyn Seymour (who played Abby Grant in the 1975 TV series) was released by Big Finish productions in December 2014.

In April 2015, series four and series five of these new Big Finish Survivors audio adventures were commissioned, for release in June 2016 and November 2016. Series six, seven and eight were released by the close of 2018, with the final ninth series being released in June 2019.

Survivors: A World Away blog