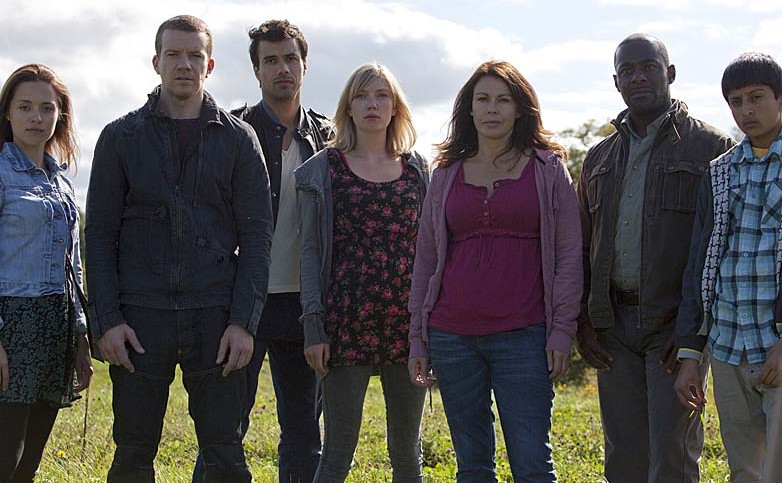 THE FIFTH AND penultimate episode of the second series of the remake of Survivors was broadcast ten years ago today, on 16 February 2010.

Episode five saw Abby’s group of survivors rocked to the core as one of their number falls victim to a deadly new mutation of the plague virus. Just after she and Al have struck up a loving relationship, Sarah contracts a deadly strain of the evolving virus. When Greg and Abby return to the settlement their group is visiting, Sarah has accepted her fate and bides her time in a self-imposed quarantine that is keeping the rest of the family safe. Abby and Greg have followed a lead to a small airport, where they find a deranged solitary survivor waiting for an evacuation flight that will never come. After Sarah succumbs to the infection, Abby turns the farmhouse into a cleansing funeral pyre, and rallies the group to return to the laboratory. However unpalatable it made be, the threat that the new virus poses compels them to aid the search for a vaccine, whatever the risks. Arriving at the site, they find the place empty and abandoned – until Abby spots Peter in Whitaker’s clutches on a CCTV monitor…

This episode succeeds both as a psychologically harrowing story of sacrifice and loss and as a brilliant set-up for the stand-off and showdown that followed a week later in the last ever episode of the series.

The week the episode was transmitted in 2010, this site said:

An emotionally hard-hiting episode which scales back on the action and adventure elements to provide a poignant and affecting exit for Sarah, before setting in motion the events that will culminate in a powerful series’ finale.

Survivors is a two series (twelve episode) post-apocalyptic TV drama broadcast on BBC One and the BBC HD channel between November 2008 and February 2010. The BBC declined to commission a third series.

Brought to the screen by showrunner (and lead script writer) Adrian Hodges, the programme was a 're-imagining' of the classic end-of-the-world drama Survivors, devised by Terry Nation shown on BBC1 between 1975 and 1977, and drew its initial inspiration from Nation's 1976 Survivors novel.

Both series of the new Survivors are also available for purchase through iTunes.

The cancelled show attracted renewed audience interest in the US, when both series one and series two of Survivors were licenced by the Netflix, Amazon Instant Video and Hulu service streaming services.

In the UK, in 2012, the BT Vision service began to offer both series for streaming download, as part of its range of TV channel packages and on a pay-per-episode basis.

In July 2013, audio-drama publishers Big Finish announced that they would be producing collections of new audio dramas based on the original (1975-1977) Survivors. The first series of new Survivors audio adventures was released (on CD and as a digital download) in June 2014.

Following an extremely positive reception, a further two series of Survivors audios were commissioned in 2014; with series two released in June 2015, and series three following in November 2015.

An audio-book of the 1976 Survivors novel (on which the 2008-2010 remake of Survivors is based), voiced by Carolyn Seymour (who played Abby Grant in the 1975 TV series) was released by Big Finish productions in December 2014.

In April 2015, series four and series five of these new Big Finish Survivors audio adventures were commissioned, for release in June 2016 and November 2016. Series six, seven and eight were released by the close of 2018, with the final ninth series being released in June 2019.

Survivors: A World Away blog